Are you interested in Microfluidic Cell Culture? We interview the Researcher Iñaki Ochoa

It has been our great pleasure to interview Iñaki Ochoa, head of the Research Group with which we collaborate to develop the latest technologies in Cell Culture.

It is a group specialized in oncology; that is, they perform treatments for cancer. The group is known for having developed the most advanced model in the world of glioblastoma; one of the most dangerous cancers.

Let´s see what he has to tell us!

Iñaki Ochoa: The conventional Cell Culture methods that are used today are based mainly on two-dimensional cultures performed on plastic plates. The cells are placed or “planted” at the bottom of these plates. To provide them with nutrients, a liquid, or culture medium, is added on top of them.  This liquid provides the necessary nutrients. These plates require a gaseous connection to the outside in order to access the essential gases (such as oxygen) to maintain viable cells. As can easily be concluded, our body is not two-dimensional, nor do our cells live in isolatiom from each other. Under current culture conditions, the cells lack an environment similar to that of our body. Cells in the laboratory do not grow under three-dimensional conditions, they have an excess of essential elements (nutrients, oxygen, etc.) and, in addition, they lack interaction with other cell types for in vivo communication.

microLIQUID is on the hunt for experts. If you have the required experience for any of the following positions, do not hesitate to contact us at info@microliquid.com: 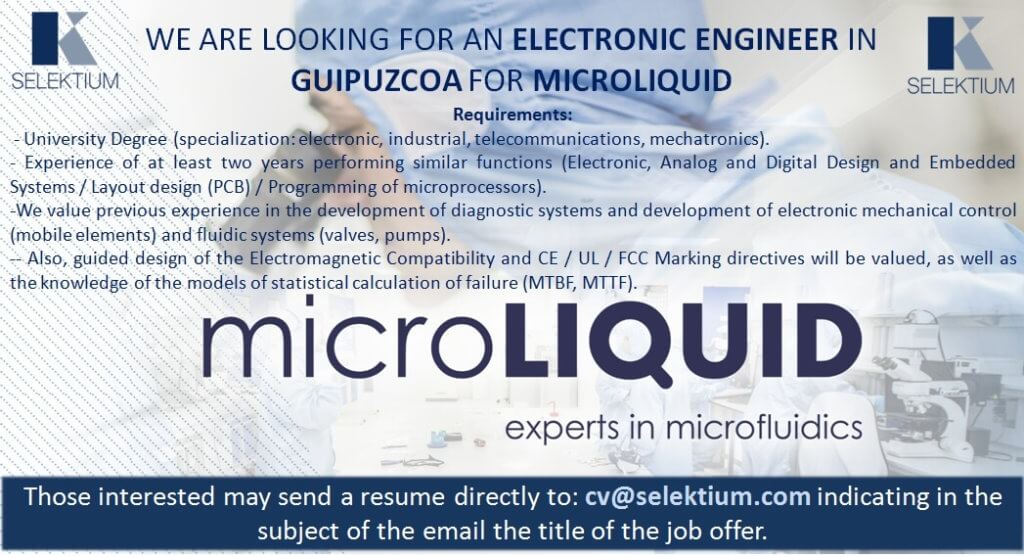 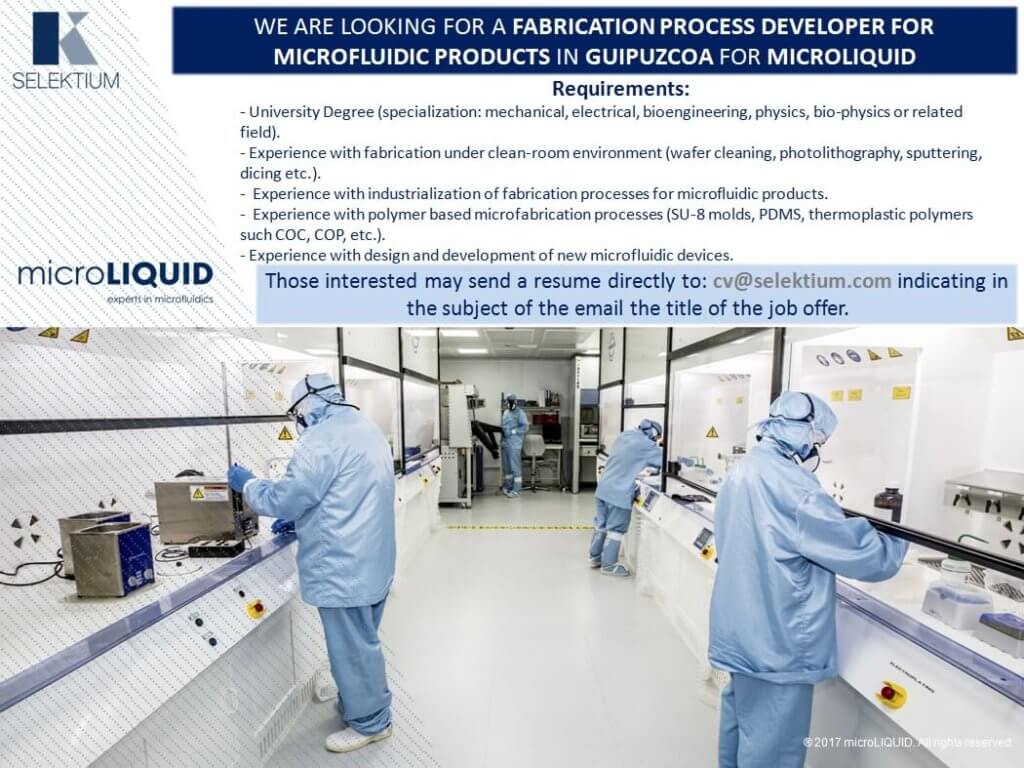 We invite you to have a look at our new video that was recorded during Compamed 2017; where our CTO Luis Fernández

talks about the future of Point-of-Care,Drug Delivery and Microfluidic Technologies.

Thank you for meeting microLIQUID

We would like to thank you for devoting some of your time in visiting our booth at Compamed, held in Düsseldorf, DE, from the 13th to the 16th of November of 2017. We hope that you had a good time and enjoyed your visit to the city.

It was our pleasure and honor, and we enjoyed many inspiring conversations. Moreover, we were impressed by the number of visitors and the great interest in our products.

In case we weren’t able to answer some of your questions about our products and services while you were there, we encourage you to contact us at the following email adress: info@microliquid.com

We look forward to being able to be of service to you. 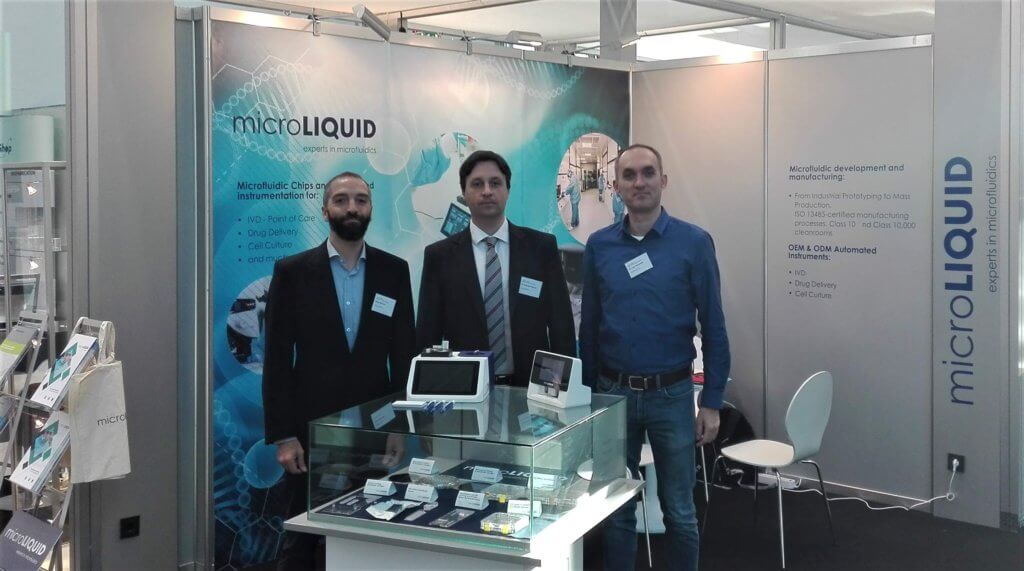 microLIQUID invites you to Compamed 2017

microLIQUID will be at Compamed 2017 this November 13-16 in Düseldorf, Germany.

We will be pleased to invite you to join Hall 8a/F34.1, where we will be demonstrating our latest offerings and technologies (services in mass manufacturing of microfluidic components and automated instruments for the IVD and pharma sector, for example.) and we will have our top product experts on hand to answer your questions.

Microfluidic Event in BIOARABA: A new workshop to expand our work in Microfluidics 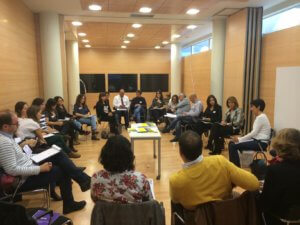 Microfluidic Event in the North of Spain

It has been a seminar directed by professionals who work on investigation and the citizens, who take advantage of the investigations that the companies carry out.

That is why, the citizens have had a great importance in this seminar, letting them choose the principal topic of the event, creating a bridge between professional people and stakeholders  that do not know much about the topic, but moreover, are interested on it.

The seminar had two important points. On one hand, there were conferences where professionals take part, which were organized in “Workshops” and everybody give their opinion and experience about the topic.  We worked on “NEW ANALYTICAL TECHNOLOGIES IN HEALTH”, been expertly managed by Arantxa Goicolea  from UPV/EHU.

On the other hand, and as mentioned before, the citizens take part on the annual investigation award ceremony and they are also able to take part in the meeting of “Healthy aging, a health social and technological perspective” where the experts shared their opinion and knowledge about the topic.

Microfluidic Chips Manufacturing: What is the product workflow?

In microLIQUID, these are the main steps we work with our customers. The design of the microfluidic architecture, based on the needs of the partner, is the spark of the project management process.

Once the microfluidic device design is accepted and developed, the second phase is the prototyping where the cost and the flexibility are key elements. We have the range of technologies to reach both objectifs

This final design is the starting point for medium and mass production processes, where the customer has the concept tested, and the proximity to the market allows higher investments.

The final material(thermoplastics) , the architecture and the biological tests need to be decided, and these elements define the production process of medium batches, like hot embossing or photolitography.

If all the elements are clear, the injection moulding solution is the cheapest option for mass production, where, once the first investment is done, the replication of the microfluidic structures is cost effective and replication can be obtained.

To obtain the replication, the validation of the microfluidics, biology, design, detection and functionality are the final steps. 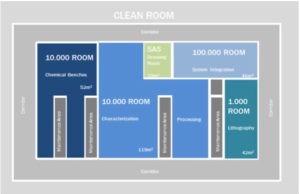 microLIQUID has  in-house the means to work in microfluidics and medical devices. Our main facilities are: 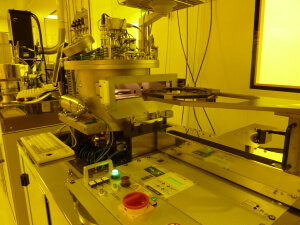 These means allow the company to develop:

Integration of the microfluidic manufacturing with biotechnological process treatments in the same manufacturing line ( surface treatmentes, Ag/Ab immobilization, freeze-drying etc) , Point of Care and Point of use Microfluidic Cartridges

Also, the company has the means to characterise and validate the microfluidic functionality required for final applications, with a Lab dedicated

microLIQUID has developed products for Biotech companies where the microfluidic development is done at the same time that the packaging and the equipment respecting the automation and the miniaturization (E.g.  qPCR, test ELISA  etc) 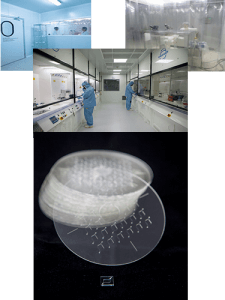 Microfluidic Manufacturing Technique: What is Xurography? 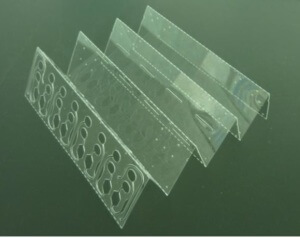 Microfluidic Lab on a chip (LOC) technology opened the possibility of handling very small volumes, bringing about the opportunity to analyze samples that were previously beyond our reach.

In addition, it has proven to have the capacity to increase both speed and sensitivity, which combined with the fact that it is a tool on the same scale as the single cell and many fundamental biological processes makes LOC a well suited tool for investigation and manipulation of these processes.

During the last decade, there has been enormous amount of research towards finding the best material, simplifying fabrication techniques, improving biocompatibility and miniaturizing the device scale in order to develop devices which are more efficient, cheaper, faster, and have a higher throughput. In this framework, the need for a fabrication tool that speeds up the research work becomes clear.

Xurography  is a prototyping technique that employs a knife plotter to structure thin foils.
This technique uses a cutting plotter traditionally used in the sign industry for cutting graphics in adhesive vinyl films

There are three types of cutting methods, and the specific one is chosen as a function of the application.
– Drag knife: Drag knife cutting uses a swivel blade that follows the cutting path of the feature as it moves relative to the material. This introduces lateral force from the blade at sharp feature corners, which can break the tip when cutting harder or thicker substrates.

– True tangential: Controls blade position with an addressable motor. When cutting corners, the blade lifts completely out of the material and rotates to the new direction. Line segments can be over-cut to ensure the material is completely cut from top to bottom at feature corners. This is useful when cutting thick materials.