The DRIE – Deep reactive ion etching: In this attack , a highly anisotropic(focus on one direction) etching, we can define the desired structures on silicon with the heights defined before. It is a  used to create also through holes and estructures in wafers / substrates,  with typically high aspect ratio.

The definition obtained with this attack over the Silicon is very good. We use the Bosch process to do it.

First we passivate with metals the wafer parts you want to keep  and then do the attach with the ion plasma which removes the silicon from the non passivated parts.

To do the DRIE process , we use a special machine you can see in the photo below. 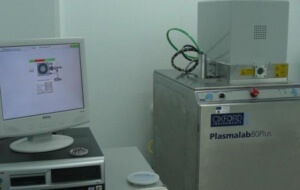 Microfluidics Manufacturing: What is Anodic Bonding? 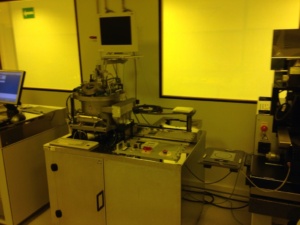 Anodic bonding between glass and silicon through electric fields

The Bonder enables Anodic Bonding  (Sealing)  between a Silicon wafer and  a Crystal Wafer. This seal is used primarily for connecting silicon / glass and metal / glass through electric fields.

Microfluidics in the Catalogue

MicroLIQUID integrated in the new BIOBASQUE Catalog, where all the information of the biotech companies of the Basque Region is available.

Here you can get the full information about the companies:

The BASQUE BIOCLUSTER is a non-profit association constituted in 2010, and represents the idea of enhancing the biosciences sector in the Basque Country. The coordination, the collaboration with all the stakeholders in the sphere of biosciences, promoting business cooperation is the basis for the competitive development of its companies and their internationalisation, and is greatly contributing to the development and positioning of the Basque bio sector.

Today the Basque Biocluster has 30 partner businesses, 58 including their subsidiaries, which in 2014 had a turnover of €268 million, 78.7% (€211 million) of which came from the export of their products and services to international markets. As a whole, the companies in the association contribute to the maintenance of 1,632 jobs.

Industry based on biosciences is characterised by the close relationship between research, innovation and competitiveness, and largely rests on the appearance of a new type of companies whose objective is to exploit advanced technologies related to the sciences of life, in order to respond to myriad needs in various industrial spheres.

The bio sector employs 1,183 people full time, or in other words, 6.4% of total R&D personnel in the Basque Country, with the outstanding presence of women, who represent more than 60% of all people working full time in biotechnology.

Research personnel, for their part, stand at 903 people, 76% of the total.

However, conventional analytical methods often require a large volume of sample and complicated time-consuming protocols.
The more portable ones are based on slow immunochromatographic strips or low-sensitivity electrochemical detection systems, whereas desktop systems are sensitive and semi-automatic but bulky and heavy.
microLIQUID tries to improve quality of life and medical services through the development of quick diagnostic devices that will carry out sample preparation and detection reducing the incidence of current society threats.

Our idea is to create intelligent and portable systems across many sectors for efficient treatment(environment monitoring, health, food , veterinary), by integrating cost-efficiently manufactured Lab-on-a-Chips.

Microfluidics Manufacturing: What is Micromilling? 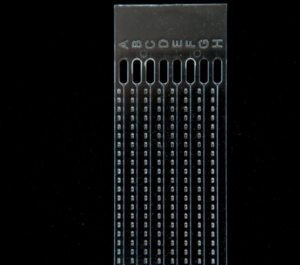 It is a mechanical method, in which we use  small cutting tools to remove the materials from a specific part of the microfluidic architecture.

All thermoplastics can be subjected to micromilling and can be used only on hardened materials. The structure resolution depends on the tool dimension; it can go down to 25μm.

PDMS structure cannot be obtained directly by this method. The replica of the design can be machined and the mould(are reusable) can be casted in order to get PDMS devices.

Technique: A computer is used to control the position of the tool  and the cutting of the structures.The milling time,depends on the milling structure, and can vary from minutes to hours .

The advantage of this technique is that it does not affect the polymeric material by UV radiation or heating, but it creates stress near the cut structures that can be avoided by heating and slow cooling. 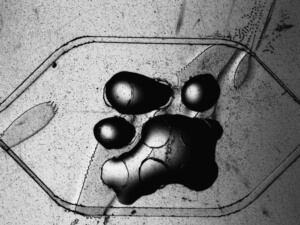 Microfluidic liquid handling: all the elements to scratch the surface of microfluidics

The aim of this document  is to scratch the surface of microfluidics, trying to describe the most significant phenomena at this scale.

The first goal of microfluidics is to take advantage of the benefits of scaling down: better control, lower cost, faster results and more. These benefits are especially relevant for biological reactions.

The effects that become dominant in microfluidics include laminar flow, diffusion, fluidic resistance, surface area to volume ratio, and surface tension. As the magnitude of these physical effects is different to the ones experienced at the macroscopic scale, fluid integrated microdevices must be designed from first principles and not simply by miniaturizing macroscopic devices.

Liquid flow in the microdomain belongs to the regime of viscous dominated flow. There is a fundamental change in hydrodynamics that occurs here, which significantly affects microfluidic operations like mixing. This barrier occurs when the Reynolds number is of the order of unity. At these scales, viscous forces dominate over inertial forces, turbulence is nonexistent, surface tension can be a powerful force, diffusion becomes the basic method for mixing, and evaporation acts quickly on exposed liquid surfaces. At low Reynolds numbers, fluid dynamics is dominated by viscous drag rather than by inertia and this is why devices that rely on inertial effects for their operation will no longer work.

One consequence of laminar flow is that two or more streams flowing in contact with each other will not mix except by diffusion. Diffusion is the process, by which a concentrated group of particles in a volume will, by Brownian motion, spread out over time so that the average concentration of particles throughout the volume is constant.

As diffusion times can be short at the microscale, microchannels can be used to create concentration gradients having complex profiles. Mixing schemes at the microscale must find ways to maximize the interfaces between solutions to allow diffusion to act quickly.

Surface area to volume ratio is another factor that becomes important at the microscale. The inverse characteristic length scaling of the surface-area-to-volume ratio implies that heat and mass transfer into or out of a chip can be enhanced as the dimensions of the device are reduced.

When working at the micro scale, another element as the surface tension forces become significant. Surface tension is the result of cohesion between liquid molecules at the interfaces. The surface free energy of a liquid is a measure of how much tension its surface contains. The path a fluid will travel through a capillary is directly related to the water’s surface free energy and inversely related to the radius of the capillary.

When microchannels with dimensions on the order of microns are used, the lengths liquids travel based only on capillary forces are significant. Surface energies have been widely exploited in microfluidics as pumping systems.